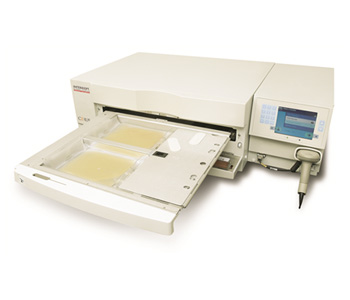 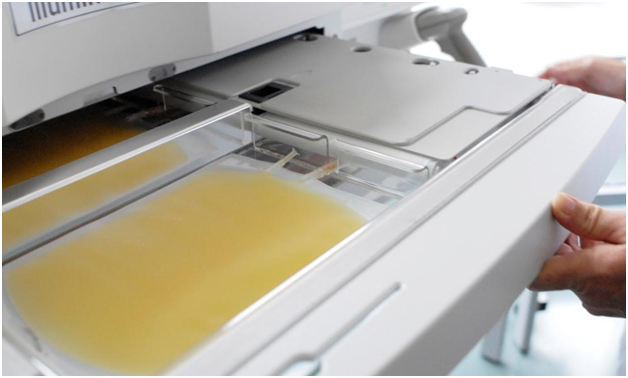 The INTERCEPT™  Blood System is designed for high throughput processing of platelets and plasma from whole blood and apheresis collections. With INTERCEPT, you can efficiently control the safety of these components by implementing amotosalen-based pathogen inactivation technology right in your own blood centre or hospital blood bank.

The INTERCEPT™ Blood System for platelets and plasma employs the unique properties of a specially developed molecule, amotosalenHCl, to irreversibly block the replication of DNA and RNA, preventing the proliferation of susceptible pathogens. Prior to transfusion, a removal process reduces residual amotosalen to trace levels. Platelets and plasma are not inactivated by the crosslinking process because they do not require nucleic acids for their therapeutic functions.

The interaction of amotosalen with DNA and RNA is highly specific and occurs with high frequency even at low concentrations of nucleic acids. Once inside a pathogen, amotosalen docks in between the nucleic acid base pairs. Upon illumination with ultraviolet A (UVA) light, an interstrand crosslink is formed, ‘locking’ the DNA or RNA together so that it can no longer replicate. The reaction requires UVA light and will not continue in its absence.

Amotosalen has no significant nucleic acid sequence specificity and is not selective for genomic material from any one organism. The replication of a broad spectrum of pathogens as well as leukocytes can be inactivated with a single process.

Well-Characterised Compound
Amotosalen is one of a group of photoactive compounds called psoralens which possess a characteristic three-ring fused structure. Naturally-occurring psoralens can be found in a variety of plants and foods such as limes, celery, and parsnips. Reports of medicinal use of psoralens to treat vitiligo and psoriasis in India date back to about 1400 BC. Today, 8-methoxypsoralen plus UVA light (known as PUVA therapy) is widely used for the treatment of psoriasis, and is approved as an ex vivo therapy for the control of cutaneous T-cell lymphoma. For decontamination of blood products, hundreds of psoralens were evaluated for their chemical and biological characteristics. Amotosalen was selected for development based on its excellent activity against a wide variety of pathogenic viruses and bacteria while maintaining the functional properties of platelets and plasma. The safety and efficacy of treated platelets and plasma were extensively evaluated prior to product approval.

Get the whole catalog